Our stock research has been a staple for stockbrokers and financial advisers for more than a decade. Now avaiable to online investors as well.

Our Focus is on Finding Stocks that Compound Over Time

At the School of Hard Stocks we do our own independent research and publish Research Reports on what we believe are the top stocks at the time.

We scour the world searching for stocks we think have the ability to compound in value over time.

We narrow our focus on what we beleive are the top 75 to 100 stocks in the stock market at that time.

After a company reports quarterly earnings, we update fundamentals on each stock's spreadsheet.

Stocks in our coverage are then ranked in our Growth Stocks and/or Value Stock Power Rankings.

For our Money Management clients, we go into each account and place buy and/or sell trades.

For Online Investors and Financial Consultants Who Manage Stock Portfolios

75 to 100 proprietary research reports on some of today’s best stocks.

More than 2000 research reports in our archives to research something you need to look back on.

Sharek’s ranking of the top stocks in his managed Growth Stock Portfolio.

Sharek’s ranking of the best value stocks in his Conservative Growth Portfolio.

If you’re the type who likes to manage their own stock portfolio, you need to be aware of the top stocks, you can’t leave your portfolio on cruise control. You have to buy big winners towards the beginning of a run higher.

There are a slew fantastic new stocks, and you don’t have time to research each one. Now you can have a trusted source to rely on to tell you what stocks look good and what they may be worth.

Research Reports are available with a Paid Membership. Here’s a free sample report, our latest on Apple (AAPL):

When researching stocks, you often look-back to past stock market winners to see what they looked like at before the big run, or see why a company had lower profits one year.

Subscribe to a Paid Membership. and gain access to our Research Report Library, which holds data going back ten years on some of the best stocks during the decade.

Here’s a free peek at our Apple (AAPL) research library:

Want to manage your own stock portfolio, but don’t have the time (or expertise) to do the work? We have portfolios you can mirror your own after.

Our Growth Stock Research includes in-depth research reports on top growth stocks in the market, including the Growth Portfolio Power Rankings. This is one of the best perks of a Paid Membership.

If you’re sick and tired of low-CD rates, and desire growth with safety, our Conservative Growth Portfolio holds some of the best Blue Chip stocks around.

Here we show you our Conservative Growth Portfolio Power Rankings., which is David’s ranking of the top value stocks in the stock market.

A great way to learn how to identify great stocks is to go back and see what a big winner looked like before it made a dramatic gain.

Apple (AAPL) has been one of the best stocks during the last decade, so let’s go back ten years see what the stock looked like at the time.

AAPL had a 7-for-1 stock split since these charts were made in 2009 Q4, so I remade these and adjusted my comments to account for the split.

This is the section in a Research Report where I give my overall take on the stock and discuss recent news as well as catalysts that could push profits higher.

In this exercise, we will look back at my AAPL 2009 Q4 research report. In the original report I commented on each chart in the left column, with a supporting chart or table on the right. In this Case Study I removed my comments and replaced them with a tutorial on how to read our charts.

Remember these tables, charts and comments are from 2009. Charts and tables are adjusted for splits. 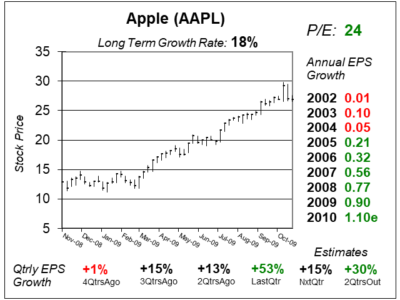 Our Earnings Tables have a plethora of data. Fundamentals from each qtr are posted horizontally, with Annual Profit Estimates at that time on the right.

Annual Profit Estimates are in green if these increased from the previous qtr and red if they declined.

Profit estimates fluctuate before a qtr is announced. Each qtrly adjustment is noted in the Beat, Met, Missed by rows. So LastQtr AAPL beat estimates by 6 cents, and this estimate was upped by 2 cents three months earlier.

In the Qtrly Profit Growth column, profit growth of 20% or greater are in green, less than 10% are in red. 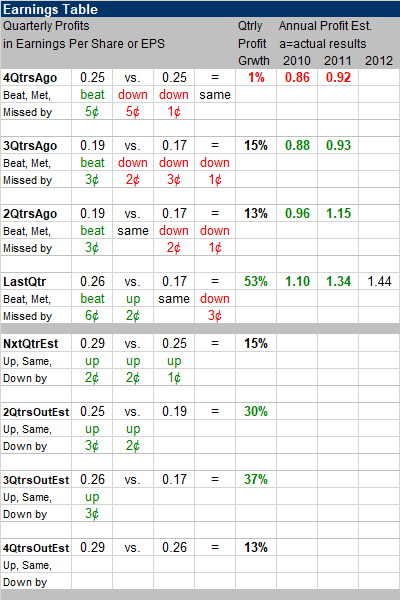 Profit History tables display a company’s annual profits (in EPS), median stock price and P/E the stock sold for. Dividend history is included on the far-right. Record profit years are in green, non-record years are in red.

Using past history and the future outlook, we estimate a Fair Value P/E for the stock. A rule of thumb is the P/E = the rate profits are growing at. 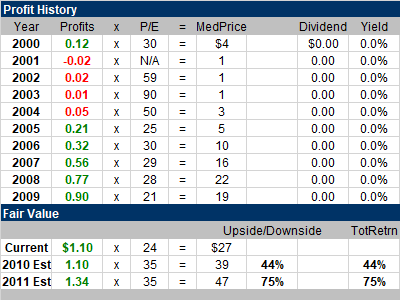 Our ten-year charts show the monthly price data for the stock during the past decade, with profits along the right and the profit growth rate at the bottom.

Over the long-run (ten years) a stock’s growth is often similar to its profit growth (if the P/E remains consistent).

At the bottom of each Research Report we tell you if the stock is worthy for one of our portfolios, and if so where the stock ranks in that portfolio’s Power Rankings. Higher rated stocks are normally larger positions in portfolios. 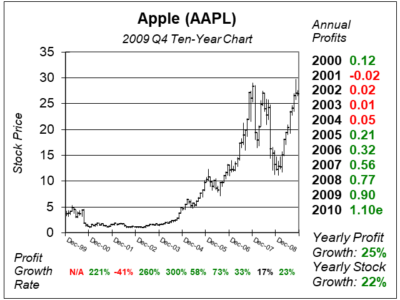 Also, Apple was my #1 stock at this time, but I have nothing to brag about. I bought and sold the stock multiple times during the past decade, and didn’t deliver the gains I would have if I bought-and-held. 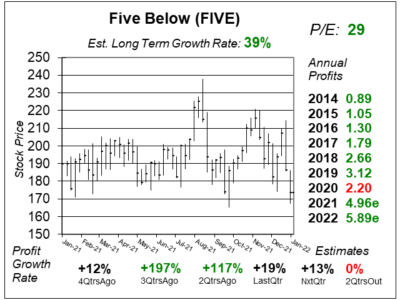 Five Below (FIVE) continues to be one of the best growth stocks in our universe. Now, with a P/E of 29, the stock has good upside. 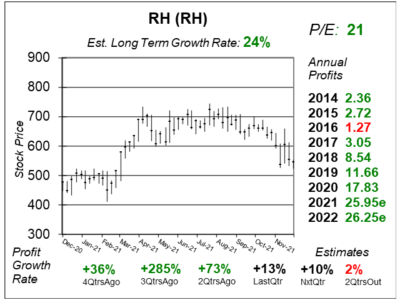 2022 for RH (RH) is the Year of the New, as it launches its Contemporary brand, two private charter jets, and a luxury yacht. 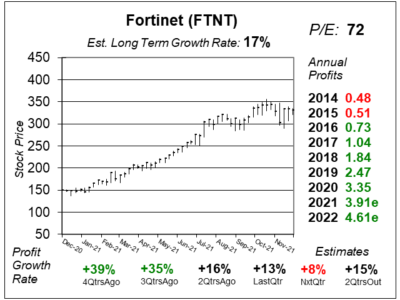 Fortinet Has Momentum as Ransomeware Climbs 10x in 12 Months 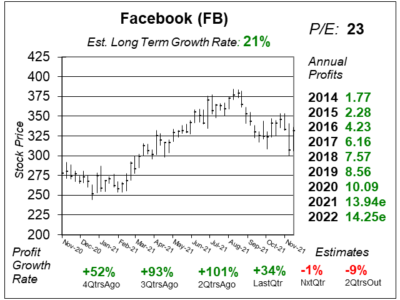 Facebook’s Metaverse Will Be a Playground for Advertising 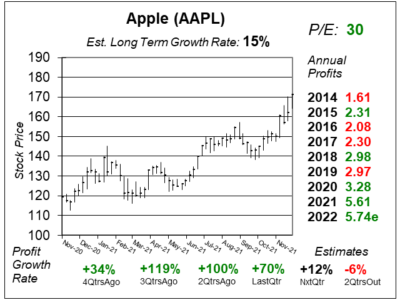 Apple is Sucessfully Bullying Other Companies Around

Apple (AAPL) is a stronger company than it used to be, as its successfully bullying Facebook and Snap — as well as Epic Games. 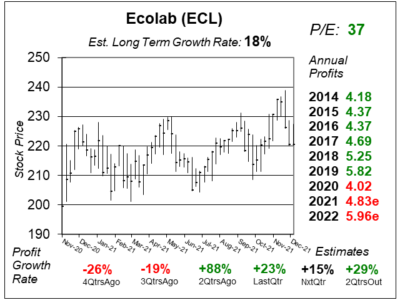 David Sharek is stock portfolio manager for Shareks Stock Portfolios and founder of  The School of Hard Stocks.

Sharek is author of the book The School of Hard Stocks — How to Get Your Portfolio Back to Even, which can be found on Amazon.

Here's What You Receive with a Paid Membership

75  to 100 proprietary research reports on some of today’s best stocks.

More than 2000 research reports in our archives.

Sharek’s ranking of the top growth stocks in the market

Sharek’s ranking of the best value stocks in the market today.