So far in 2022, the stock market’s breathtaking moves have been hard to swallow. The pain has been great, especially with high growth stocks.

Growth at a price, not any price.

I follow 100 stocks in the market each day, and write quarterly research reports on all of them.

The trend I’m seeing in the stock market is the stocks that have performed admirably are the ones with:

To get a better grasp of what’s working in the stock market, I’ve developed a Focus List. This list of 10-15 stocks might be the recipie for succcess investors need to weather the storm while still staying invested for the next Bull Market.

Historically, the some of the best gains in the stock market have come off of market lows. That’s why we’re searching for tomorrow’s stock market winners today!

Note: we make all our own charts & tables, old school style. The charts are one-year charts that were made during 2022 Q1, thus the numbers and stock prices have since changed. 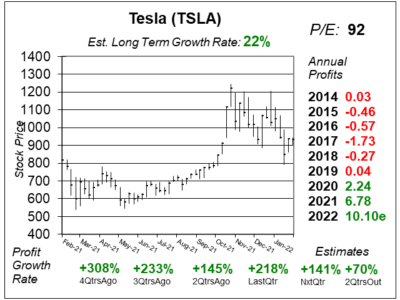 Tesla (TSLA) profits are soaring while the company takes capacity from two to four plants overall. Elon Musk said he expectes vehicle delivery growth of 50% on average for multiple years. I think Teslas could become 20% of the cars on the road.

Looking at TSLA’s numbers, analysts predict the company will make a profit of ~$12 this year, but this figure is trending towards ~$18. With the stock around $900, that’s a P/E of around 50 using my guesstimate on the profit estimate.

TSLA seems like the best stock in the stock market at this time. Future growth could come via vehicle insurance (which the company already offers in some states), and the Optimus robot program. Elon Musk thinks Optimus will ultimately be worth more than the car business and Full Self Driving combined. 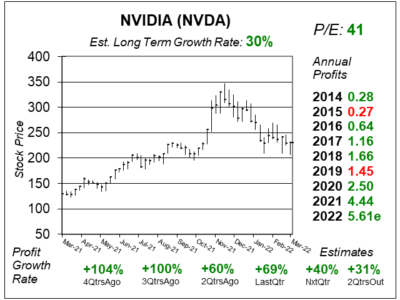 Nvidia (NVDA) has four main divisions, and within those Datacenter and Gaming are giving the NVIDIA two avenues for exceptional growth. A catalyst for both divisions is NVIDIA’s A100-based platforms. NVIDIA’s A100 Tensor Core GPU is the world’s most powerful Artificial Intelligence (AI) platform, and offers unprecedented performance.

NVDA is growing fast. Look at the Annual Profits in this chart. When the stock market turns up, I expect this stock to regain its momentum as a true market leader. 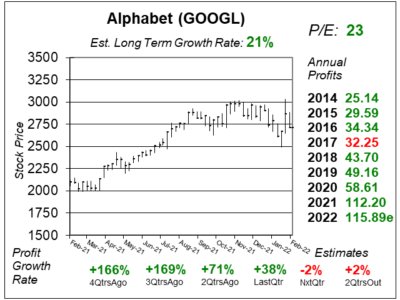 Founded in 1998, Alphabet’s (GOOGL) main division is Google Search, which performs more than a trillion searches per year, and makes up a majority of total revenue. Here’s a run-down Alphabet’s main divisions:

Google is a conservative growth stock that is also has a good growth rate. The company has had profits up every year since its IPO in outside of 2017 (which was only down as it switched its accounting practices to a more conservative stance). 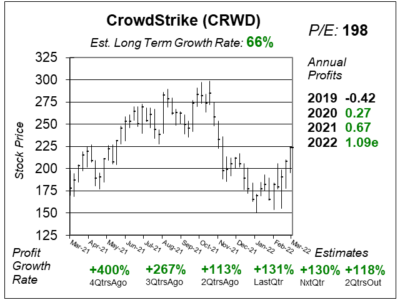 CrowdStrike (CRWD) focuses on endpoint protection for PCs, laptops, iPads and mobile phones. This is protecting the hardware at the end of the internet, like Norton made famous with PC protection.

CrowdStrike is the most prominent company in the field of cybersecurity and one of the fastest growing publicly traded companies with great growth opportunity ahead. And the fundamentals are fantastic.  The only negative is the P/E of 198. Yet, the company is spending to grow so its sacrificing profits to capture market share and annual recurring revenue. 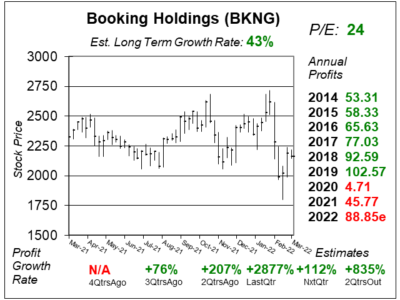 Booking (BKNG) is the world leader in online travel and related services. The Company offers its services through Booking.com, priceline.com, agoda.com, Rentalcars.com, KAYAK and OpenTable, Inc.

With COVID-19 now behind us, people are going to travel this Summer. I think revenue will surge on Priceline and Booking, and the stock could become one of the top stocks of 2022.

Booking stock is truly a Blue Chip stock. I’ve owned it since 2006 and profits hit record highs every year up until 2019. BKNG currently has an Estimated Long-Term Growth rate of 43%, but this stock was considered a 12% to 15% grower before COVID-19. 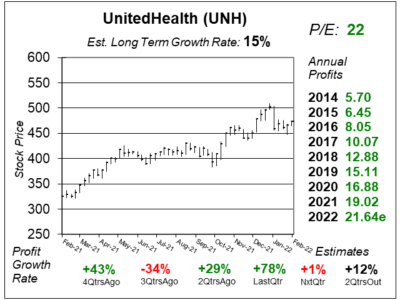 UnitedHealth (UNH), the nation’s leading health insurer, is a stable ship in what is now an unstable stock market.

UnitedHealth is one of the world’s safest stocks, with a double-digit growth rate, a dividend, and a stock buyback program. UNH’s median stock price has been up every year during the past decade and has grown at double-digit rates (above 10%) during eight of the past ten years. Profits have grown each year over the last decade, from $5.28 in 2011 to $19.02 in 2021. This stock is a steady grower, while management buys back stock and pays dividends. 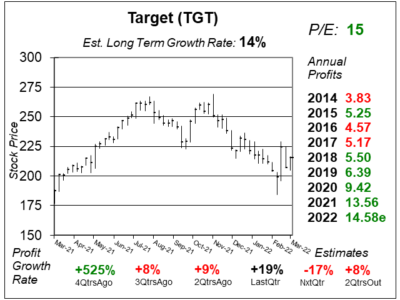 Target (TGT), the second largest general merchandise retailer in America, continues to show sings of healthy growth and stability. Lately, the company has been focusing on growing same-day services. During 2021, sales through same-day services grew by 45%. And that is on top of 235% growth in 2020.

Target is also becoming more efficient and productive on its digital platforms. Digital fulfillment has helped stores raise annual revenue from $40 million to $55 million the last 5 years. Along with selling goods, those stores double as fulfillment centers where almost all the company’s online orders are packed and shipped or prepared for a customer to pick up in the parking lot. 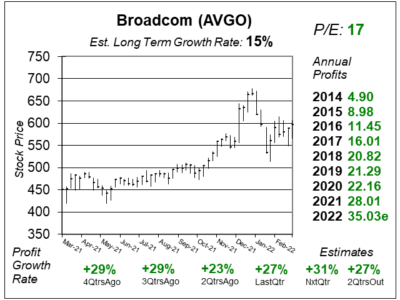 Broadcom (AVGO) seems like a gem of a stock in this current stock market, as it has a lot of qualities value stocks have. Broadcom is mainly a semiconductor/network equipment company, as that side of the business comprises 3/4 of total sales. The other 1/4 of the business is software, including cybersecurity. The company has have record profits every year for the past decade, with profit growth at an amazing 29% a year.

Broadcom is a semiconductor and software company that designs thousands of products for home connectivity, cloud data centers, and enterprise businesses.

AVGO is growing nicely and has a reasonable valuation. Profits have grown an average of 27% a qtr the past 4 qtrs, and estimates are for 29% growth on average the next 2 qtrs. The stock pays a healthy dividend of 3%, and the Estimated Long-Term-Growth Rate is 15%. Management even buys back stock. 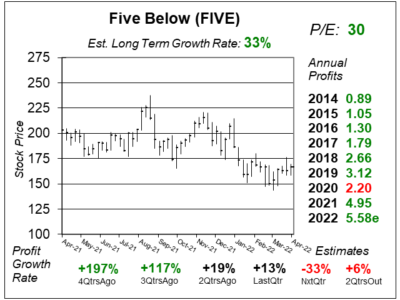 Five Below has been one of the best retail concepts around, as same store sales have increased 15 consecutive years. The company has no debt and has been buying back shares. The stock has a solid Estimated Long Term Growth Rate 33% per year. That’s a profit growth estimate. Hopefully the stock can keep pace. 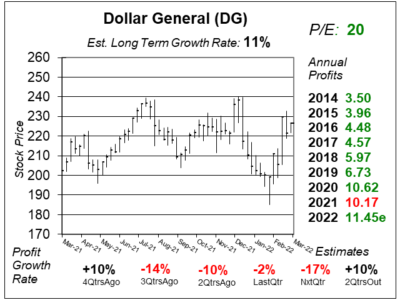 Dollar General is a quality company. Prior to 2021, the company grew same store sales for 31 consecutive years. Management buys back stock and pays a dividend. Future growth opportunity could come from Mexico, as the company is planning on putting its first 10 stores in that country in 2022. 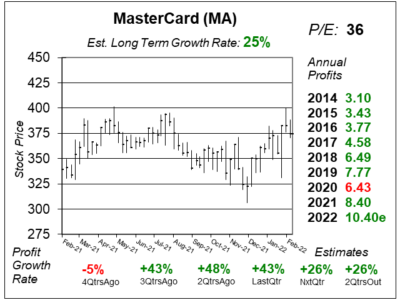 MasterCard (MA) could be a stock market leader in 2022 as profit growth is back-on-track from the downturn caused by slow travel during COVID-19.

MA had five consecutive qtrs of poor profits during the COVID-19 outbreak, and has since grown profits 43%, 48% and 43% the past three qtrs. Looking ahead, profit growth is expected to average 24% the next 4 qtrs.

MasterCard is a safe stock with high certainty and consistency that might give investors mid-to-high teens returns long-term. MA currently has an inflated Estimated Long-Term Growth Rate of 25% a year as profits are set to rebound in a big way in the coming years. The stock also has a dividend yield of less than 1%.

My Fair Value on MA is 35x earnings, which is $364 a share this year, right around Friday, April 30th’s close. This stock is fairly valued here. But MA has good upside in the years. 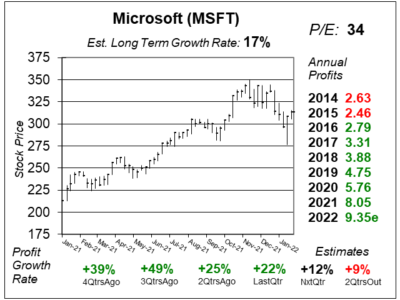 Microsoft (MSFT) products include computer operating systems such as Windows, productivity applications including Excel and Word, software development tools including Azure, computing devices with its Surface tablets, and video games with its Xbox devices.

Microsoft has my favorite recipe for a core holding. It has a double-digit profit growth rate, a dividend, and a stock buyback program. It’s also one of the safest stocks in the world. Microsoft’s Est. LTG is 17% per year, but the company is growing profits faster than that now. The stock also yields 1%. The dividend has been increasing every year since 2006.

I’m excited about the returns that could be coming once we get past this rough patch in the market.

Although things seem bleak, keep in mind we’ve been having these “corrections” every couple of years. In 2018 we had a 20% decline between September and December. Then in 2020, stocks crashed during the onset of COVID-19. To summarize, the stock market appreciates:

David Sharek is stock portfolio manager at Shareks Stock Portfolios and the founder of The School of Hard Stocks. Sharek's Growth Stock Portfolio has delivered its investors an average return of 18% per year since inception vs. the S&P 500's 10% during that time (2003-2020). David's delivered five years of +40% returns in his 18 year career, including 106% during 2020. David Sharek's book The School of Hard Stocks can be found on Amazon.com.