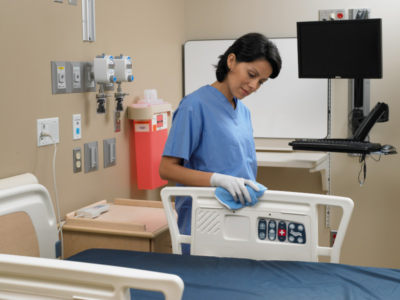 Meanwhile, Ecolab’s (ECL) profit growth looked good prior to the pandemic in 2020.

The Nasdaq 100 broke through & closing above the 50SMA. Plus we have a breakout, and have been seeing lower lows. All three things are bullish.

I closed out of hedges. I don’t expect tech earnings to be strong for the disrupted companies, but the chart says what it says. $QQQ pic.twitter.com/jgf1FfcR9J

Chart of the Day 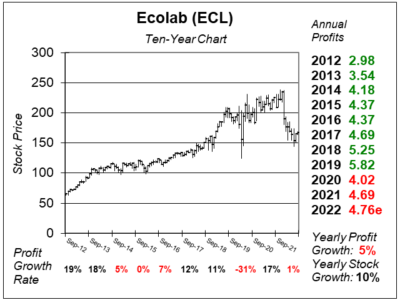 Our chart of the day is a ten-year chart of chemical cleaner company ECL.

ECL was founded in 1923 as Economics Laboratory and its 1st product was Absorbit which cleaned carpets on the spot and eliminated the need for hotels to be shut down to be cleaned. The company went public in 1957, eventually changed its name to Ecolab in 1986, and has increased its dividend each year since. Today, it boasts 6000 patents and 1500 scientists who continue to innovate, creating new and better products.

Based on the ten-year chart, David Sharek said:

Notice that the chart looks good prior to the last three years. Management thinks they will have more Ecolab-like performance going forward.

Trisha Concepcion has been working as a credit rating analyst since 2018. She obtained her Bachelor's and Master's degree in Applied Mathematics major in Mathematical Finance from the Ateneo de Manila University in the Philippines. She also has a Minor in Economics degree.